Several years ago, a friend of mine tried to convince me to use Twitter by claiming that the service was mostly populated by comedians sharing jokes and trying to “one-up” one another. As a listener to a number of comedy podcasts and having recently attended Gilda’s LaughFest in Grand Rapids, Michigan last March, I thought I’d use Twitter Analytics to examine how comedians use Twitter and what Twitter Analytics can tell us about why they use do so.

What can a user of "Analytics for Twitter" find out about how and why professional comedians use Twitter?

Granting the premise that many comedians use Twitter, and certainly the ones that are examined in this blog post do, I expect that Twitter provides a forum for comedians to advertise their tour dates for free to a select audience of their fans who have chosen to follow the comedian.  In addition, tweeting with some consistency may serve to provide the comedian the opportunity to build loyalty among his/her fan base.  Cross-promotion of events that he/she is attending with other comedians and engagement with other comedians on Twitter may allow the comedian to gain more followers and by extension increase their popularity and ticket sales. 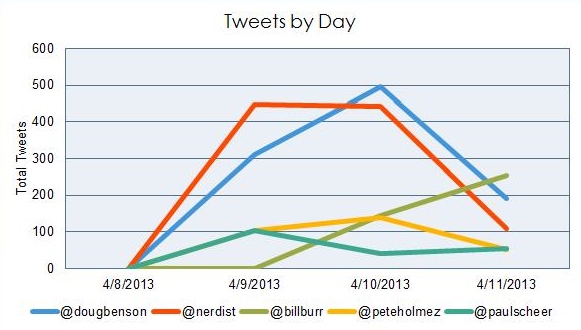 This graph shows all tweets by the comedians listed above as well as tweets that mention them.  It shows that by far the most tweeted and tweeted about comedians are Doug Benson and Chris Hardwick.  But even the least tweeted comedian, Paul Scheer, broke 100 tweets in the four days examined.  This would seem to show that all of these comedians receive some amount of publicity from their use of Twitter.

Analytics for Twitter allows the user to filter and search the tweet details that it has imported.  The above four tweets are by actress Lennon Parham and comedian Ari Shaffir and mention Pete Holmes in them.  This indicates some engagement between different comedians, actors, and actresses on Twitter.

Retweeting seems to be a popular way for comedians to engage one another on Twitter.  The above screenshot  shows several retweets of a Pete Holmes tweet by comedians Andy Richter, Robert Buscemi, and Ari Shaffir.

Analytics for Twitter allows an analyst to divide a dataset derived from a set of up to five search queries in many useful ways.  For the purpose of this analysis, the Twitter statistics of several comedians were examined.  Somewhat counter intuitively, it appears that Tweet frequency by the comedian does not positively correlate with the overall number of Tweets they are mentioned in.  This may indicate that building a Twitter network by engaging your Twitter followers through non-Twitter forums -- for the comedians in question, podcasts and live shows – may translate to a more robust Twitter present than engaging directly via Twitter. This conclusion can only be considered tentative due to the small timeframe sampled by Analytics for Twitter.  Analytics for Twitter offers an interesting and exciting opportunity to visualize Twitter data, but this small sample-size may limit its effectiveness in drawing conclusions from Twitter data.

*All Screenshots taken from Analytics for Twitter application for Microsoft Excel using the PowerPivot Excel add-in.