The Future is Online

The Future is Online

I work at the most 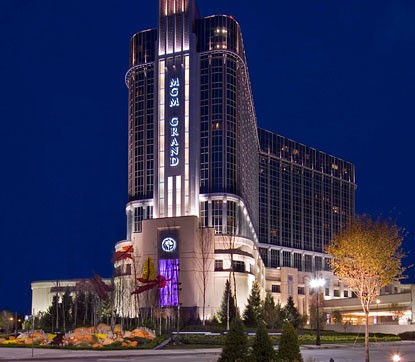 beautiful casino hotel property outside of Las Vegas in the United States, and it is right here in Detroit, Michigan!  MGM Grand Detroit is the only Forbes 4 Star rated casino hotel property outside of Las Vegas.  Forbes is such a crucial rating because of their brand and respect throughout the industry.  Not only do they help raise our brand by association with them, but also shows our commitment to customer service.  Unlike other rating systems such as AAA’s Diamond Rating, which focuses on amenities, Forbes is focused on customer service; making it much harder to maintain a high rating.  Having a presence with Forbes.com is just one of the many social media outlets MGM Grand Detroit focuses on to help maintain is industry leading competitive edge.  We are responsible for roughly 50% of the gaming market here in Detroit, which is equivalent to about 1.5 million dollars a day.

MGM Grand Detroit has developed a social media team within their traditional marketing department.  The creation of this team shows the emphasis we have on social media and how our company recognizes social medias importance.  This team is in charge of MGM’s online presence including: Twitter, Facebook, LinkedIn and Yelp.  I was fortunate to meet with the VP of marketing last week and he spoke on this very issue.  He talked about having to reallocate his budget from more mainstream forms of media such as print (newspaper and magazines) to focus more on the online aspects of marketing.

The days of traditional “four wall” marketing are in the past.  Today the fifth and sixth “walls” of Twitter, Facebook, and other social media outlets are the ones that matter.  The traditional ripple effect of one person having a bad experience telling 5 people and those 5 people telling 10 people are over.  If one person has a bad experience, they jump on their social media outlet and tell their 100-1000 followers and friends; who can then re-tweet or share their original disgust.  Yelp is the online forum where venting takes place most often about a particular destination.  Yelp enables our guests to share their good and bad experiences about a particular part of the property specifically, rather it be the hotel, spa, or one of our various restaurants.  MGM uses this department and the information gathered over social media to not only put out the fires, but also look for true areas of needed improvement.

Between Twitter and Facebook alone, MGM Grand Detroit has 100,000+ followers and friends.  MGM utilizes its contact with its fans to show them its appreciation by offering them various online only offers and updates about the property. MGM takes it a step further with myVegas.  MyVegas is a free online app where guests can go on at no charge and earn free comp points towards their next stay at MGM’s various properties.  The points can be used on hotel rooms, restaurants dinners, and show tickets.

MGM has installed a system where complaints and compliments can be seen in live time on the property.  This empowers us more to continue to fix our weaknesses and improve on our strengths instantly.  The continuous efforts on this survey and with our high social media presence will allow us to remain the industry leader because of our dedication to our guests.  As the saying goes, “The guest is king!” Still holds true today regardless of the media outlet.