In the past few years, much attention has been given to the revitalization and economic development in downtown and mid-town Detroit. While not taking anything away from the necessity of having a vibrant core, the city of Detroit also has several interesting and historic neighborhoods that students, faculty, and staff, could consider as livable housing options. I would like to highlight two historic Detroit neighborhoods that are not located downtown or along the Woodward Avenue corridor. They are North Rosedale Park and East English Village. My reasons for selecting these two neighborhoods are:

Accordingly, as the cost of residential, retail, and commercial property in downtown and Mid-town Detroit rises, these two neighborhoods can prove to be excellent options for students, faculty and staff who desire to live within the Detroit city limits.

North Rosedale Park (NRP) is located in northwest Detroit bounded by Grand River Avenue on the South, Evergreen Road on the West, McNichols (Six Mile Road) on the North, and the Southfield Freeway (M-39) on the East, and is less than ten minutes to Fairlane Mall (Dearborn Michigan) and Telegraph and 12 Mile (Southfield Michigan).

“North Rosedale Park is our favorite of the three enclaves that make up the Grandmont / Rosedale Park community on Detroit’s west side. This neighborhood consists of close to 1700 well-built English and French Tudors, American colonials, and arts and crafts bungalows. The neighborhood park is the only privately owned neighborhood recreation “facility” in the City of Detroit and holds a number of year-round activities including art shows, concerts, and other events. Residents include well-known sports figures, artists, musicians, and professionals.”

In addition, NRP has been serviced by the Grandmont Rosedale Development Corporation (GRDC) for more than 20 years. The GRDC programs and initiatives include: 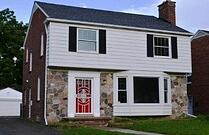 the GRDC shows that on November 15th HUD Secretary Shaun Donovan toured Rosedale and visited a house under renovation.

is boundedby Harper Avenue on the North, East Outer Drive on the West, Mack Avenue on the South, and Cadieux Road on the East. EEV is just north of Grosse Pointe.  Housing styles include bungalows, Cape Cod houses, colonial houses, and Tudor houses.  The EEV Association is the community association coordinating neighborhood redevelopment and revitalization.

the Detroit Public Schools’ (DPS) state-of-the arts new $46.3 million school called the East English Preparatory Academy. The DPS website states the school can accommodate up to up to 1,200 students in the 221,000-square-foot facility in four academic wings.  It includes eight science laboratories, a high-tech media center, a performing arts wing, and an athletic complex with a community health clinic.  The stadium has a multi-seasonal, synthetic field for track, football, soccer and other athletic programs.

While the vibe and excitement of Detroit’s downtown and Mid-town receive the most media attention and marketing of any of the city’s neighborhoods, students, faculty, and staff should consider residing in these two or the other historic neighborhoods.  NRP is in close proximity to the retail and nightlife of West Michigan Avenue in Dearborn, Michigan.  EEV is close to the commercial and retail districts of the Grosse Pointes’ Kercheval Avenue.  Both of these neighborhoods are within 10 to 15 minutes of downtown and suburban malls as well.

Another important topic of concern is safety.  A Detroit News article dated November 26, 2013 entitled “Michigan campuses step up security after slaying” has a quote as follows:

To improve public safety, the NRP, EEV, and other Detroit historic neighborhoods contract with private security firms while also maintaining very active volunteer neighborhood watch programs.  While a residential community in Detroit may not take the place of “on-campus living”, with Mayor-Elect Duggan emphasizing improving the entire city, very reasonable home rental and purchase prices, proximity to WSU campus and downtown as well as quick and easy access to vibrant suburban entertainment and retail venues may make these two neighborhoods viable options to WSU students, faculty, and staff.

(All credit and accolades for this tremendous blog post are for Ricardo Kisner who is the author and content creator.)