It seems that in just a short amount of time, social media has swept the world off of it's feet with the freedom to communicate and network via websites like Facebook, Twitter, and Instagram.  It seems as if there is almost no end to what you can share and find on websites like these.  Social media is an easy, fast, and fun way to keep up with the new age and share your life with your friends, fans, and loved ones.  Communicating with them on a network that's easy to access makes these social media super appealing to people of all age groups.  What you share on your social media account is totally up to you, and what you share is what you'd like to represent as you.  Although this is an amazing and popular feature, sometimes social media isn't the best place to share personal information, locations, and images. Sometimes the content you post on social media can do more harm than benefits.

Privacy in general is a sacred thing for any regular human living in the world.  Through privacy humans could have broader boundaries and borders that limit other people from interacting, relating or even approaching in some matters.  Privacy should not be taken for granted.  It is almost contradictory that some share their most personal moments and feelings as information over the internet for everyone to view, yet we put our privacy on a pedestal and complain when people voice their opinions over what they have posted out.  Over the decades, people fought for their freedom of rights which includes privacy as a top priority.  So, what about e-privacy?  Or, more formally, Social Media privacy.  How do we protect ourselves from the risks of the internet?  That is the question that I will be answering as you continue reading this blog. 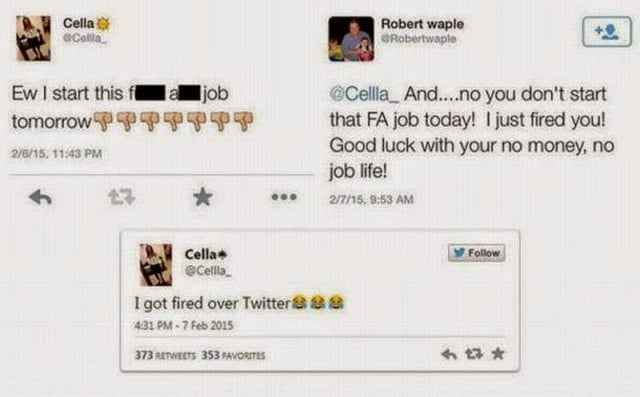 This picture shows how social media could potentially lead to trouble and losing your job over stupid rants.

In the image above, for reference, a young girl thought that it would be a good idea to vent on Twitter about how she isn't looking forward to showing up the next day to the job she just received a position for. Her intentions were most likely not to get fired, but that is what happened. Her words and negative language toward the company that hired her caused her to get a result she should have been expecting. Her intentions were simply to vent on social media as her safe place to share her thoughts and feelings. Unfortunately, because of the freedom of the internet and the boundless nature of social media, she was exposed. It is easy to feel that these social networking sites are a safe place to vent, but without proper privacy measures, there is a huge risk to sharing information you don't want everybody to see. It is so easy to abuse the freedom on websites, so try to be careful next time you decide to post things that others might see!

In the picture, we see the eye looking which implies you are being watched all the time.  If you think about it, the idea of being watched without consent or knowledge is really scary.

From the name itself we can understand that this person does not touch nor come near a social media website nor interact with the internet as a social media. He might use the internet or a computer regularly, heck he might be a nerd but that does mean that he uses social media. Or its could be the opposite scenario and the person opposes the use of internet/computer or technology in general. That person we call the Offline Socialist. Guaranteed protection for privacy vs internet predators/hackers when it comes to stealing personal information found of social media websites.

I can include myself in the following category. As the name presents itself, the minimalist is a person that limits his social media presences and watches it carefully. Thinks twice before posting or sharing his life on social media. Makes sure his pictures if uploaded are set to friends only and his posts consist of private messaging instead of wall posts and attracting attention. This person seeks the use of the minimalist ideas to maintain his social life with friends over the internet and social media websites and stay up to date in this constantly updating world and follow trends over becoming an offline socialist or pushing his limits and become what we will discuss below, the Internet Meme.

The know it all guy. The person that you can know what he ate yesterday from looking at his wall posts or twitter posts. The person that shares every video, news, website, song, and finally and most importantly meme they see. They think the internet is a playground for them and a journal for their memories. I'm not saying i'm against such people but what I'm hinting at is that people should be careful to their privacy matters and what they post and discuses over the internet or social media in general. A great example of that would be the example picture of the woman that didn't get to start her job and decided to share a rant and lost her job the second day.

When you have all of your information on the internet, it is more often than not a risk at exposing yourself to people that you don't know well enough, or at all. Although there are privacy settings enlisted on all social media networks, that doesn't stop strangers or people you know from having access to your information.  That also doesn't shield people from posting things that aren't really anyone's business.  Some people get so lost behind their social media account that they post things out of needing attention, thus social media is a bad outlet for some people to express themselves.

Social media is a wonderful way to stay connected with your family and friends, and it's a great place to keep up with the pace of the world and stay in touch. It is ultimately up to you to decide how you will use these features so accustomed to the everyday person.  You can choose to lurk, or you can choose to go all out and share your life with no regrets.  You are the one behind the screen, so you choose what you put out.  You choose how you are seen, or not, and that is your impression to the world.  So next time you’re ready to post, or not, be aware that whatever is on the internet is on the internet for potentially anyone to see, and try to think twice before you say something that could ultimately lead to anguish.