END_OF_DOCUMENT_TOKEN_TO_BE_REPLACED

Exploring the Correlation between Adult Literacy Rates and Life Expectancy

Using Gapminder longitudinal research, I explored the relationship between literacy rates in adults 15 years of age and above, and life expectancy in years.  The results were presented in a scatterplot graph, which depicted a positive, nonlinear relationship between the two variables.  Generally speaking, the greater the literacy rate, the greater the life expectancy.  Most countries followed this pattern, with a few outliers as the exception to the rule.  The graph in Figure 1 below was created using the Gapminder software.  Literacy rate, adult total (% of people ages 15 and above) is represented on the X-axis, and Life Expectancy (years) is represented on the Y-axis.  The size of the plots on the graph is dictated by the countries’ populations.  A correlation between the two variables is distinctly visible. 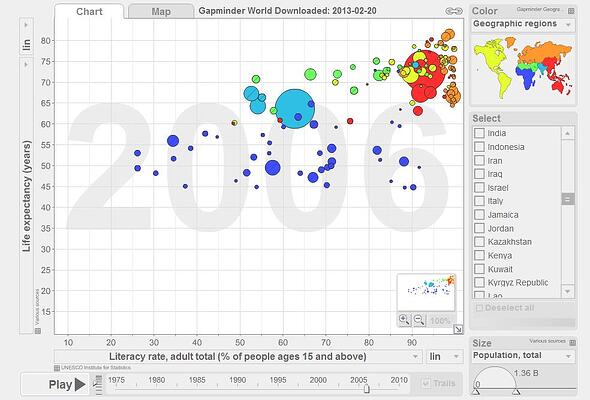