Although there’s been many predictions and “promises” made about Mixed Reality over the last few decades, the technology and its associated costs have finally reached a point where broad market penetration is now feasible.  These promises were not only relegated to the way we live and consume entertainment, but also how we work.  It's easy to envision how Mixed Reality (MR) technologies, such as Augmented Reality (AR) and Virtual Reality (VR) have organizational and business applications.  Beyond the consumer market, Mixed Reality is establishing itself in “industries like healthcare, education, tourism, real estate, and marketing, where the uses are more practical than fantastical”5.

The fundamental goal is to create a good product or service that’s realistically achievable and enables the organization or customer to succeed.

Augmented Reality could potentially allow a remote technician to contact a more experienced co-worker that can provide knowledgeable diagnostic assistance from across the country, or allow a worker to view diagrams and inspection manuals while performing maintenance on a complex machine.  Designers and engineers could view and manipulate virtual prototypes from their desk, while an executive or market analyst could have a real-time financial dashboard projected on their glasses as they review organizational performance.  Health and safety solutions also exist, such as a surgeon that could be practicing a complex operation at home the evening before a surgery or an engineer virtually inhabiting a remote drone operating in a hazardous area.  These applications might seem like science fiction, but this technology is available now. 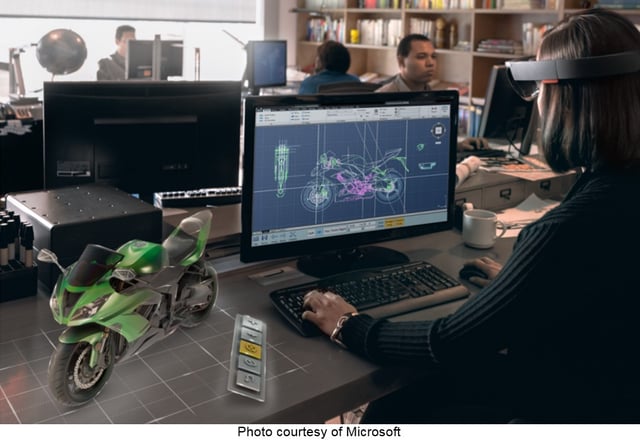 In the everyday office environment, Mixed Reality technology can be used to escape the physical confines of the desk, examples could include the general lack of aesthetics associated with “cubicle farms” or the limit of how many monitors and interfaces a user can interact.  These “open-office” concepts can be enabled via a Head-Mounted Display (HMD) that’s used when an employee would like to focus and be immersed in a virtual work environment “with multiple, manipulable browser windows, and integration with Google Apps, and Office 365, and get some work done — all while sitting somewhere scenic like a grassy field, or the moon” 1… like a virtual "fortress of solitude for people"1.

The opposite of this is also possible, where a remote worker enters a virtual world as an avatar to socialize, collaborate and attend business meetings.  The avatar is used to convey and emphasize nonverbal communication and it assists in situations where nonverbal cues like facial expressions and body language are typically absent (e.g. phone conferences).  Over the years, technology facilitating the ways in which people communicate has transitioned from simple phone calls, to conference calls, to video calls, to all the new features enabled by modern mobile devices and smartphones.  Much of this technology is more incremental than revolutionary and the potential for significant productivity benefits certainly exists.

Some applications with a compelling Mixed Reality “value add” include:


When the web and mobile revolution occurred, some organizations and market segments did not adapt fast enough and were left behind, suffering because of it.  There’s been pressure in these groups to figure-out what to do with the new Mixed Reality technology and how best to present it to potential clients.  Many organizations are creating innovation labs to develop new platforms, the kinds customers will be asking about eventually.  The focus of the labs has been to find products or partners that are "additive" in some regard.  As recent technological breakthroughs have led to lower cost and higher quality products, Venture Capitalist are now confident enough to invest by funding Technology Accelerators.  These are in competition with larger companies such as Facebook, Samsung, HTC, Sony, and Microsoft who have also been establishing themselves in the market.

Although it’s still early and the market continues to evolve, there are a few brands (Oculus) and platforms gaining significant attention.  Each with various categories of Mixed Reality experiences, price points and degrees of portability.  The growing mobile market has been playing an increasing role in the adoption and awareness of Mixed Reality applications, powered by the Smartphones that many people already have.  The keys to success for the new startups are monetization, significant (venture capital) funding and/or acquisition.

Organizations need to educate themselves about Mixed Reality technology through experimentation and not be afraid of it.  Exposure can be achieved with minimal expenses.  The average user’s smartphone can be used to facilitate Augmented Reality environments with the installation of a few free applications and a basic development environment for Virtual Reality can be enabled by acquiring an additional $15 viewer.  Trying different systems and gaining knowledge about what exists, what could exist, and investigating potential product development ideas is essential to success.  Ideally, organizations should find a partner with experience to help guide them.  There are numerous problems and unexpected challenges with this new technology and it's easy to incur misguided expectations.  A good partner will help provide realistic expectations of what’s currently possible and can assist with getting past “gimmicks”; it’s not uncommon for an organization with little MR experience to want to add an artifice they think will help sell the product or brand rather than an exceptional product experience with a lasting impact.

Mixed Reality content shouldn’t be treated like other traditional creative mechanisms.  When vendors are approached by customers to assist in the development of a product, the vendor often needs to explain why different processes and tactics must be used and\or what’s feasible or not in these particular types of environments.  Having a creative brief describing what the brand wants to accomplish, as well as details about the messaging and what they're trying to achieve is very important and efficient.  This allows the partner to more easily construct a vision and evaluate what the best Mixed Reality experience would be in addition to planning the next steps.

Entrepreneurs and solution developers are going to have many ideas about potential uses of the technology, but need to avoid getting caught in the new technology hype.   Although creativity is wonderful, there are hazards when organizations lose sight of goals.  Mixed Reality represents an evolution of the ways in which we can display, present, and interact with computer generated data, but remains fraught with many technical, creative, and hardware restraints.  The successful implementations focus on extending human imagination, not supplanting it.  The fundamental goal is to create a good product or service that’s realistically achievable and enables the organization or customer to succeed.