Ask Outrageously! A Few Simple Tips to Help Anyone When Negotiating

Negotiations can be difficult but with this one simple tip, anyone can become an expert at it!

Most people negotiate with others every day of their lives. You may not realize it but when you ask the barista at a coffee shop for some coffee you are in fact negotiating.  By this logic most negotiations go quite well, but for those tougher negotiations there is one tip that can really help you get what you want!  What is this tip?  Well its basically as simple as Asking Outrageously!

After attending the INBOUND 2016 conference in Boston this year, I was lucky enough to attend a session on negotiations.  Going in I just looked at it as a better way to get what I want out of my friends and other people I may negotiate with but this session really opened my eyes on what you can negotiate for and how to approach a negotiation.

Well if it isn't obvious, the main idea of this session was to ask outrageously.  The speaker Linda Swindling (Yes her last name is quite ironic given the subject of her session) was a Harvard Law graduate who has worked in corporate law for over 10 years which she left to pursue a career as a public speaker and consultant on the topic of negotiations and self help.  Swindling explained in her session that when you ask for something, to not be afraid to ask for more than what you actually want, even though you may not think it is possible or it may be selfish.  Swindling went further into the topic by talking about that the chances of hearing a yes rather than a no comes from what you do before you ask rather than the question or suggestion itself.  Swindling believes that in order to be successful when negotiating, you must first ask for what you want and make sure it is appropriate, but then reinforce that by gaining the respect of the person you are asking or "negotiating" with.  The example she used was from her experience as a lawyer.  A client came to the firm that she was working for, and asked to only work with one of the partners as he was not willing to work with anyone else.  This is where Swindling (who was not a partner at the time) talked to him because the partners were not available at the time and there was a few things she made sure to do.

Swindling made sure that first what she was going to tell him was appropriate, and secondly that she was going to try and earn his respect as well.  She explained to the potential client that she would be the best lawyer to help him out as she has quite a bit of experience and then went into why she was qualified to take the case.  She ended the conversation re-iterating that he should allow her to take the case.  Well after putting her cards on the table the potential client decided to accept her as his counsel.  Swindling was able to win that "negotiation" by asking for something that was outrageous and appropriate given the context: that the client only wanted to work with a partner, knowing that Swindling is not a partner.  Also justifying her suggestion by gaining the clients respect through explaining her previous work history and talking about what makes her qualified enough to ask for this opportunity.  Swindling later on mentioned that if a person is listening to you then you actually have something they want.  People don't spend the time to listen to every little thing someone says so when they give you that attention, that means you already have an advantage!

This negotiation tip is backed by a study that Swindling did in which she asked people what would make them say no to a request.  You can see the results of that study in the figure below: 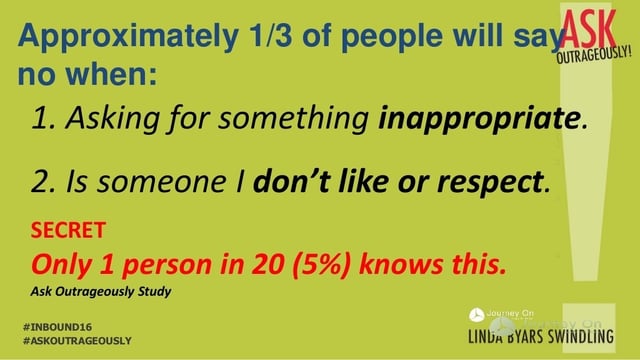 A third of people that were asked mentioned these two reasons as why they would say no to a request which shows how important focusing on these aspects are.  There were other reasons but not many people understand this, so after reading this blog post even you can consider yourself part of that 5%.

After learning about this everyone in the audience did an activity where we paired up into teams of two, one person had their hands closed in a fist and the other had to get him/her to open their hands.  (This was pretty strange at first and I did not see how it related to the topic but I went along with it.)  My teammate was not able to get me to open my hand.  Well after Swindling asked the audience to stand up if they were successful in getting ther partner to open up their hands.  A decent amount of people stood up and when asked how they did it a few answers came out but the one that was the most interesting was that some people just flat out asked!  People that asked their partners to open up their hand made up almost 75% of people that were successful which only goes to show that asking outrageously works!  My partner didn't ask me to open up my hand once and looking back ... I don't think I would have thought of that at all.

Well after learning about these methods, I decided it was time to start "Asking Outrageously!" myself.  I tried this for the first time at my internship where I was struggling to learn what I needed to know to be able to complete my job.  After weeks of asking for supplemental resources to no avail, I was planning on giving up.  In a last ditch effort I decided to use these tactics in order to get the help I needed to really learn and be more productive.  I knew I was not asking for anything inappropriate but I did not know if my team respected me enough so I decided to schedule a short meeting with my manager and assignment leader.  In this meeting, I started off by talking about what I have done so far that has made me a valuable member of the team and what I planned to accomplish.  By doing this, I showed the team that I am actually working hard and although taking longer than usual, that I am in fact providing value.  Next, I explained that in order to continue and to grow I would need additional resources and help and gave a few examples of what I was looking for.  This request was well received and I eventually got what I was looking for!  This was a sharp contrast from before when I would just ask simple questions and get referred to Google or my workplaces learning resources for further guidance.  By changing what I was asking for and how I went about asking for it I was able to do what I could not do before.  Well at this point, you could say I felt like I could negotiate with anyone and I was ready to take on the world.

Overall, Inbound 2016 was a great experience and I was glad I was able to take what I had learned and apply it to real situations in my life.  Swindling's session was pretty basic and simple but I think that is what helped it make it beyond powerful as now I have learned how to really step my game up when it comes to negotiations.  So far, I have only used these tactics in low stakes negotiations but I know soon I will be using what I learned for the big leagues and I am quite confident that these tips can really help anyone master any type of high level negotiations.

Good luck out there!