The Reality of Hoarding

Reality TV is well-known for making spectacles out of people and the lives they lead. A&E’s Hoarders made headlines by focusing on the most extreme cases of hoarding anyone had ever seen. While this type of exploitation is seen by many as unacceptable it has helped to shed light on an often overlooked and misunderstood mental disorder.  According to Thobaben (2006), "an estimated 700,000 to 1.4 million people in the United States have compulsive hoarding syndrome." The numbers may be even higher now with recent research suggesting the rate of hoarding disorder is somewhere between 2% and 5% of the population (Tolin, 2011). 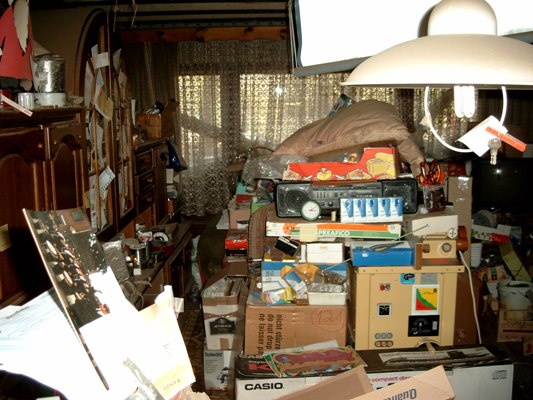 According to the University of Michigan Health System, compulsive hoarding poses safety and psychological risks. The most obvious dangers are that of fire, unsanitary living conditions and potential injury from being trapped under an avalanche of debris. Even though I'm a child of a hoarder myself, it's often difficult to understand the emotional responses of someone so attached to inanimate objects.

"5 Famous Hoarding Cases" is an article by Discovery Health that features stories that made headlines. Although many may cringe at the public's insatiable appetite for chronicles of hoarding, the resulting national dialogue has led to a better understanding of hoarding as a true mental disorder, which helped move the subject out of the realm of taboo and into one of reality. It’s no longer something no one talks about or deals with, which is definitely a step in the right direction.

What exactly is hoarding anyway?

According to Oxford Dictionaries, to hoard means to "accumulate (money or valued objects) and hide or store away." Mental health professionals often link hoarding to obsessive compulsive and anxiety disorders. According to an article from Everyday Health, this often misunderstood disorder is finally going to to receive its very own designation as “Hoarding Disorder” in the newest edition of the Diagnostic and Statistical Manual of Mental Disorders (DSM-5) due out sometime this year (2013). “Could you be a compulsive hoarder?,” an article by Everyday Health, lists the top 9 signs of hoarding:

According to Everyday Health, every home gets a little messy from time to time, but it’s important to consider that there may be a real problem if the mess starts to have a negative impact on a person's daily life, health or safety. People often have a difficult time accepting the fact that there really is a problem, which can be an obstacle for those trying to intervene like family members or mental health professionals. The idea that someone can’t or won’t get rid of what most others would consider trash is also a stumbling block. Some may believe the problem is simply one of having too much stuff, lack of motivation to clean or insufficient organization skills. There is no comparison between simply having a little clutter in your home and that of hoarding. People suffering from this disorder often exhibit complex compulsive behaviors and emotional responses to both accumulating and losing their possessions, because they tend to attach significant meaning or imagined purpose to objects most others believe are worthless.

Why do people hoard?

According to the article "Why do people hoard," from the Oprah Winfrey website, people may hoard things for many reasons.  One thing is certain - hoarders have an unhealthy attachment to “things” that may not make sense to the majority of the population. According to Saxena & Maidment (2004), hoarders often have information processing deficits:

“Compulsive hoarders have great difficulty making decisions and categorizing possessions. Because every item feels unique, they create a special category for each one and resist storing them together. Many hoarders also report marked distractibility and difficulty in maintaining attention on tasks.”

Those that hoard may hold onto a wide range of things, because they believe they’ll be able to "put them to good use" or they may wish to pass them on to a friend or loved one. According to Steketee et. al (2003), the objects hoarders save may have sentimental value, they may feel responsible for the fate of the objects or they may hold onto things simply to feel a sense of control in their life.  However, every “thing” saved cannot possibly be put to good use by only a few people and the more a hoarder holds onto "things" the more chaotic their environment becomes, which feeds their insecurities and anxieties.  As a result, there is a constant struggle between those that hoard and those that must deal with the reality of the hoarding situation.  Also, a hoarder is constantly being torn between their desire to hoard and the overwhelming anxiety they feel from living in such an unsafe environment.

Why don’t they just throw out the junk?

A video from Time Magazine's website entitled "A Hoarder Confronts Her Clutter," offers a small glimpse into the lifelong struggle hoarders often face that may make it diffucult for them to "just let go" of the stuff many consider junk.

Hoarding is a complex subject that may fascinate some and disgust others, because why would anyone save “trash” when it’s obviously a health hazard? Why would anyone want to keep so much stuff that they can barely get through their home? According to many professionals, the main culprit is one of anxiety. The very thought of getting rid of their “stuff” evokes very high levels of anxiety in those that hoard, which often results in an unhealthy cycle of purging and re-acquiring even more possessions.

While it may seem like hoarders can't be helped - that's simply not true. Like many mental disorders, the road to recovery can be very long and arduous. However, it's one that can lead to happiness if those suffering from the disorder are able to get help and keep up with their therapy. Family members may even become closer to their loved ones suffering from the disorder when they step in to help with the recovery and cleanup process.

Back to the Top

Hoarding: The Basics by the Anxiety and Depression Association of America (ADAA). Offers an overview of hoarding, symptoms, reasons behind the disorder and help resources.

Hoarding: How Collecting Stuff Can Destroy Your Life by Kayla Webley, Time, April 26, 2010.

Hoarding Cleanup.  National resources to find help with every aspect of hoarding in the United States and Internationally.

The articles below can be accessed through the Wayne State University Libraries databases, but require a valid student account. If you're not a WSU Student - check with your local library for more information on accessing databases, which may require a valid library card.

Leave a comment - What did you think of the blog?

To contribute business research and practitioner experience in a forum that fosters dialogue and an exchange of ideas about business, from both academic and practitioner perspectives, with special focus given to business in Michigan.