Analytics for Twitter: Which is more popular, knitting or crocheting?

As a crafter, it has always seemed to me that knitting is more popular than crocheting.  People tend to be more familiar with the term, anyway.  I couldn’t say how often I’ve heard someone mistake a crocheted object for having been knitted, but not so much for the reverse.   I decided to investigate using Analytics for Twitter, comparing hashtags #knit and #crochet, as well as a few related items: the hashtag #sew and keywords crafting and fiber arts.  The search covered the time span of February 8 – 15, 2013.

The first thing that was immediately clear was that #knit returned nearly twice as many tweets (1500) as #crochet (799), which in turn, returned about twice as many tweets as #sew (393).  This would suggest that knitting is more popular than crocheting, which is more popular than sewing.  I was surprised, as I thought sewing might be more popular than either knitting or crocheting as it is somewhat more straightforward, without the loops, twists, and fancy hand manuvers of the yarn crafts.  However, it is possible that some of the #knit or #crochet tweets could also contain #sew as sewing is often used to join pieces together when finishing a project.  Looking at Total Tweets returned overall confirmed my initial suspicions, but does this measure tell the whole story?

The graph of total tweets from February 8-15 shows some steady chatter on #knit, #sew, and fiber arts throughout the week, with #crochet and crafting coming out of nowhere on February 15.  This curious behavior is explained upon further investigation of these terms.  It appears that the Analytics for Twitter program only retrieved tweets for #crochet and crafting from February 15 and not the days beforehand.  The Instructions tab sheds some light on this quirk:

Comparing results over the same time interval yields different results.  On February 15, #crochet was used in 799 tweets, #knit was used 230 times, and #sew appeared 195 times.  Interestingly enough, crafting fell between #crochet and #knit with 399 tweets and fiber arts was only used 22 times.  This could be because while both crafting and fiber arts are general activities that can include crocheting, knitting and sewing, crafting is a much more general category that would also include fiber arts.

According to the Tone Graphs, each term is used largely in tweets of a neutral tone.  The term with the highest percent of positive tweets is crafting, narrowly followed by fiber arts.  These are followed by the hashtags, among which #crochet was used in a positive tweet more than #sew, which was used more than #knit.  If positive percentages are weighted with +1, negative percentages with -1, and neutral percentages with 0, then there is a slight shift in the popularity rankings.  Accounting for negative tweets, the most popular term is crafting, followed by #crochet, a tie between #sew and fiber arts, and finally #knit.

Another way to look at Tone is by score.  Here, popularity would be defined by the highest average Tone Score.  Looking across the week, the highest average Tone Score is held by #sew on February 13, then a tie between fiber arts and #knit, followed by #crochet and crafting.  So while the tweeters often had positive things to say using crafting and #crochet, they were more positive in their tweets that included #sew, fiber arts, and #knit. 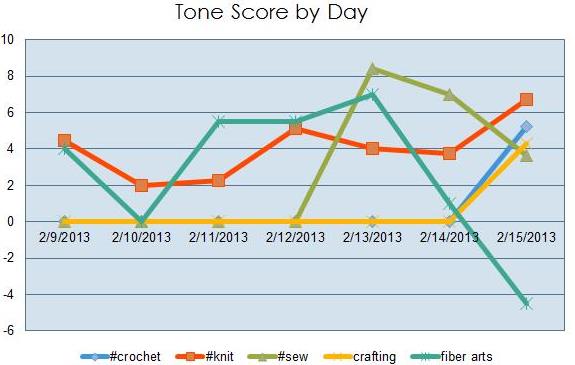 A third way to gauge popularity would be to count the number of unique tweeters using each term.  Such a count may be more accurate than Total Tweets because there could be a few tweeters tweeting often with one term and creating a false sense of popularity.  Each tweeter would be like a vote in the popularity election – the more unique tweeters that are using a term, the more popular it must be.  At this time, there is no easy way to do that within Analytics for Twitter.  Another feature that would have helped in this analysis would be the ability to adjust the time frame on the Topics tab.  It will be interesting to repeat this search over different periods of time, to see if the results change.  The ideal comparison will include tweets over multiple days for both hashtags.

Determining whether knitting or crocheting is the more popular of the yarncrafts is a difficult task, even when using a powerful tool such as Analytics for Twitter.  Depending on the accepted definition of popular, either craft will come out on top.  In the future, it would do well to define what popularity means, and which Analytic tools will measure it.  Considering the many facets of popularity, a carefully formulated combination of metrics may be the best.  In any case, my bias is towards crochet.