An Introduction to Mixed Reality Technology

Advancements in computing have continued to enhance user effectiveness and efficiency in all aspects of home and work life.  Mixed Reality technology is rapidly becoming one of those major technological progressions.  Mixed Reality (MR) applications are a hybrid implementation of Augmented Reality (AR) and Virtual Reality (VR).  Although similar, there remains significant differences between the two technologies.

Augmented Reality is a view of the real-world environment that incorporates computer-generated enhancements such as sound, video or graphics data. Its purpose is to complement an individual’s present perception of reality.  Early definitions of AR defined it as having the following three characteristics:1

Augmentation is typically used in a semantic context and utilizes environmental elements in real-time.  By employing this technology users can interact and manipulate their surrounding real-world environment through overlaid computer information.  This is in contrast to Virtual Reality which replaces the real-world environment with a simulation.

Although Virtual Reality has been around for many years, this medium has yet to reach its true potential.  This technology can provide the “ability to be transported to other places, to be fully immersed in experiences, and to feel like you are really there -- (it) opens up unimagined ways to interact and communicate”3.  Until recently, the cost and a number of other factors have kept Virtual Reality out of reach from the average consumer market, being primarily restricted to commercial or military environments.  Fortunately, technological advances have changed that, with many new Mixed Reality hardware devices and software applications being made available now and many more planned for availability within the next year that are poised to make a significant impact.

Mixed Reality coalesces aspects of the real and virtual worlds to produce an environment where “physical and digital objects co-exist and interact in real time”2.  Although AR and VR have been around for decades, their use in daily life has been growing rapidly over the last few years.  Augmented Reality is becoming increasingly popular in marketing and sales, with many industrial applications.  Virtual Reality is also becoming an integral component within product development, manufacturing and integral to the construction process.

The differences between the two primary Mixed Reality components (AR and VR) can be better explained by using the “Reality–Virtuality Continuum”.  This is a continuous scale that ranges from the completely virtual environment, commonly referred to as “Virtuality”, to the completely real (Reality).  It’s composed of all possible combinations and variations of virtual and real objects.    Between these two extremes is Mixed Reality, where both the real and the virtual are blended. There’s also varying degrees of integration, such as “Augmented Reality, where the virtual augments the real, and Augmented Virtuality, where the real augments the virtual”4.  The distinctions between reality and virtuality can easily become blurred as applications are increasingly incorporating both at various levels within their use.

The four categories of the Mixed Reality-Virtuality Continuum consist of:

1. Reality – The environment that constitutes the real world consisting of tangible objects.

2. Augmented Reality – The environment where virtual objects are augmented into the real world.  As a user progresses through the continuum from Reality to Virtual Reality they’ll first encounter Augmented Reality.  Augmented Reality consists of the real world with virtual objects and information inserted into it.  The experience is typically facilitated by a computer integrated headset and some form of location or object identifying technology.  In 2014 the Wayne State University Library system launched a custom Augmented Reality application for Google Glass and Android Smartphones called “Wayne State Campus Explorer”. The application “allows users to wander the campus while getting information on the places around them. As the user draws closer to a location, the app displays other information like building hours and other points of interest”7.  It also lets users locate major campus buildings in real time, including distance from current location.

A simple way of implementing AR is passively through markers, such as Quick Response (QR) codes.  These are a type of matrix barcode that’s machine-readable optical label contains information about the attached object. The tags are read by an imaging device (such as a camera, scanner, etc.) and processed using complex algorithms until the image can be adequately interpreted.  Their popular due to fast readability and higher storage capacity than standard UPC barcodes. Common usage of this technology is item identification and marketing because of the innate ability to trigger access to or presentation of associated information.  When these markers are not available, more complex and computationally demanding image recognition systems are needed, particularly when positional location and tracking of the user is utilized.

3. Augmented Virtuality is the process of augmenting real-life objects or notions into the virtual world.  This refers to predominantly virtual environments, where physical elements, such as people or physical objects are dynamically integrated into the virtual world in real-time.  This is generated by streaming video from physical spaces (e.g. via web cam or smart phone) or through the digitalization of physical objects.  The use of real-world sensor information from gyroscopes, accelerometers, GPS, etc... can be used to control and provide context for the virtual view. 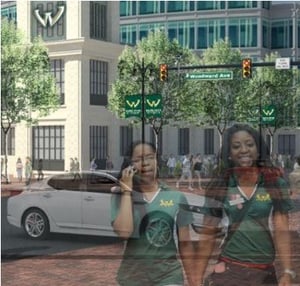 4. Virtual Reality – A simulation of an environment that is completely artificial or virtual.  None of the objects are real nor do they have a physical form.  Virtual Reality completely immerses the user in a virtual environment through a headset that isolates them from the real world. Although this allows for a potentially unlimited setting, in reality it's a spatially restricted experience in that the user cannot wander too far from the device providing the experience (cable restrictions) or room restrictions in situations where a portable device is being utilized. This is unlike Augmented Reality where the user is able to move freely around in the real world.  VR utilizes a number of technologies in-order to function, such as motion tracking hardware, 3D displays and various types of input devices. The primary modules that enable VR are stereoscopic rendering and motion tracking.  When functionally integrated, VR allows the user to “feel immersed, or present, and the illusion of VR is compelling enough to transport us to another place”3.

The enterprise market for these technologies is growing rapidly. In particular, the market value for Augmented Reality applications is expected to significantly surpass that of Virtual Reality.  Experts are predicting that “VR and AR will be a $150 billion market by 2020, with $120 billion of that dedicated to AR”5.  The reason for this is because Virtual Reality, although flashier, takes you out of the real world.  Unless you’re in the prototyping phase of construction or product design, Augmented Reality is more applicable to interaction with the physical world around us. Developers and engineers have been progressively releasing more business productivity and enterprise applications with the goal of enhancing business value.  But VR is still awaiting its major market break-through, which could potentially be in the form of immersive entertainment or possibly the much anticipated launch of the Oculus Rift...this is being assisted by Samsung Gear VR and others.  The enterprise Augmented Reality market functions primarily as an operational tool with a number of applications, specifically in “business operations, logistics and retail because these are areas where access to knowledge systems is going to be most beneficial."6 AR in general will also be beneficial in a collaborative sense for most of the business-to-business sectors.

Although the canonical use case for Mixed Reality is entertainment, many “professional applications are emerging for both VR and AR in areas like health care, architecture, education, product design, manufacturing, retailing, transportation, logistics, exploration and the military”6.   The technology has also been generating significant consumer interest lately, causing many organizations to devote a vast amount of resources into the development and engineering of new products, an example of this is Facebook’s acquisition of Oculus.  Internet chatter seems to indicate that Mixed Reality might be the next major milestone in computer technology history.  With so many popular smart phones possessing AR and VR capabilities and recent advancements in computing in general, this technology should finally come to fruition.  Although many unknowns remain, 2016 does appear to be the year when consumer VR becomes widely available with the launch of numerous Mixed Reality systems.  As the technology proliferates, a plethora of business opportunities can be conceived for both the enterprise and consumer market.  Mixed Reality has tremendous potential for a “Blue Ocean” market strategy.

The second chapter of this three part series on Virtual Reality will focus on exploring the technical requirements of Mixed Reality.

The third and final chapter of this series will examine various ways organizations can leverage this technology.